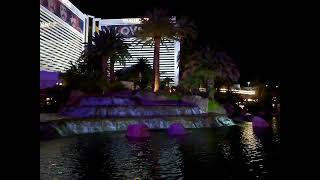 The Mirage Hotel is just one of the many Las Vegas Hotels located on the strip, but it has a long history, at least according to Las Vegas standards. The Mirage opened November 22, 1989, was built by developer Steve Wynn, has a Polynesian theme and at the time was the most expensive hotel-casino in history with a construction cost of $630 million. The Mirage hosts 3,044 rooms and the hotel structure is 29 floors tall. At the time of it’s opening, it was the largest hotel in the world. The Y-shaped design of the hotel tower was later copied by other Las Vegas Strip hotels including Treasure Island, Monte Carlo and Mandalay Bay. The top five floors were used for high roller rooms and penthouses. The Mirage was the first hotel to be built in in sixteen years after the completion of the MGM Grand in 1973. In December 2021, Hard Rock International announced it would purchase the Mirage’s operations for $1.075 billion. Under the deal, the Mirage will rebarand as Hard Rock Las Vegas. The sale is expected to be finalized during the second half of 2022. MGM will keep the name Mirage and will license it to Hard Rock for up to three years, until the property is rebranded. The property will receive a needed complete renovation as part of the rebranding and Hard Rock will be removing the volcano to make room for a 1,000 room guitar shaped hotel, similar to Seminole Hard Rock. Some people are upset that the volcano is leaving the strip and there are petitions to save the Volcano. But like Vegas is–in with the old and out with the new. I’ll be posting a video of the Seminole Hard Rock Guitar hotel, because I was just there a few months ago, and it’s just my opinion but, I think it’s going to look pretty darn cool on the strip!